With this post I’m inaugurating the occasional “Homage to…” series in which I exalt, perhaps with a bit too much hyperbole, a plant, fruit, vegetable, or something else digestible that nature has bestowed upon us.

There are better ways to start the day (a dive from the deck of a sailboat docked in the crystalline blue sea just off a deserted Croatian island), but it’s hard to beat the satisfaction of eating what you have just picked, especially if the thing in question is a perfectly ripe fig. 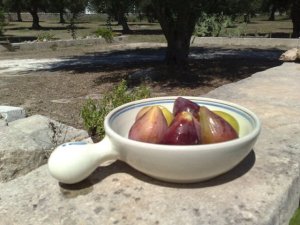 There are many other wonderful fruits that afford much joy when eaten right from the tree or bush, but there is something so perfect about the fig. Simple without being dull, sweet without being saccharine, filling without being heavy.

It seems I am not the only one to wax poetic about the fig. I recently stumbled across the following: “Since time began mankind has tried to harness the power of the Fig.” With this beguiling observation begins what very well may be (as its writer asserts) the most extensive investigation into the fig cookie. All the cookies reviewed use between 20-30% fig…hummm, I’ve got six words for these fig cookie people.

Ex-President Bill Clinton has become a vegan, so I’ll be writing to him to suggest he spice up his now seriously restricted diet by ramping up his fig intake. Not sure a fig tree gives its best at the excessively high latitudes of upstate New York, but I think the Clintons have the resources to get fresh figs delivered every morning. Not quite as good as picking the fruit yourself, but sometimes you have to settle (and for all those out there who out of principle are against settling, have a look here).

8 thoughts on “Homage to the Fig”