I’m just back from a few days of New Year’s celebrations in Trieste, which is tucked away in Italy’s far northeastern corner. After a quick look at the map it will not surprise you to hear that this sliver of coastline has been contested  through the ages and it’s not entirely unreasonable to presume that Trieste could now be part of a different country if 20th Century history had gone a little differently. 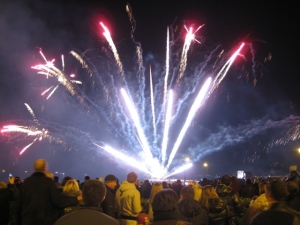 Trieste was the only port of the Austrian Empire for centuries and then with the birth of Austria-Hungary in the 19th Century the city’s importance grew as it became the empire’s most important port and fourth-largest city (after Vienna, Budapest and Prague). With this much non-Italian history in its past, Trieste promised to offer some interesting eating opportunities.

The menus of most of the city’s restaurants look as if they could have been imported from someplace a bit further north and east. Lots of goulash everywhere, sausages and other Mitteleuropa goodies that after a meal leave you wondering if your heart and veins will go on strike to protest the fat content.

I ignored my heart for three days (hope it doesn’t hold a grudge) and indulged. I’m normally not a fan of boiled meat, but in Trieste they boil pork to perfection and they pull the meat out of the water long before the taste has seeped away, as happens with boiled meat in the Cremona-Mantova area. Another enjoyable local dish is goulash with gnocchi di pane. The goulash is the goulash of Hungarian fame though the gnocchi rather than the small potato gnocchi common on Italian menus are large balls of bread, milk, eggs, cheese and meat that make them essentially like the canederli you find in Trentino-Alto Adige.

Ljubljana, the capital of Slovenia, is barely more than an hour from central Trieste so a visit to one really should include a stop by the other. More sausages, more meat, more testing of my heart’s resilience. 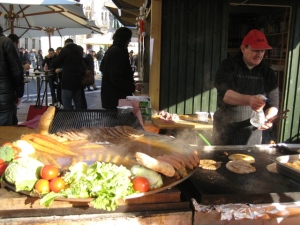 The conspiracy against my heart continues in Ljubljana

Ljubljana is positively beautiful and I’m already negotiating with my heart and veins about when I can return. It seems I’ll be allowed back in a year’s time as long as I limit myself to one sausage a day.