Cinque Terre is one of those places that is so beautiful a visit is worthwhile any time of year, or so I surmised. 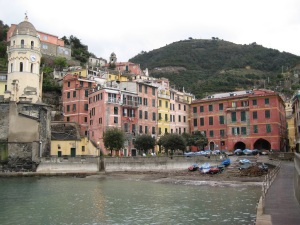 These five towns hanging precariously to the Ligurian cliffs in northwestern Italy have for years been an almost obligatory stop for zillions of tourists (it seems we have Rick Steves to thank for that). All well and good except that Cinque Terre has become impossible – or at least very difficult – to enjoy in the summer and now even in late spring or early fall. With this in mind I figured it might be nice to hike the Cinque Terre in the dead of winter, January to be more specific, a week ago to be exact.

I have on many occasions scampered up and down the hills from Monterosso to Vernazza then onto Corniglia. I’ve also strolled the much easier walks from Corniglia to Manarola and the justly famous Strada dell’Amore from Manarola to Riomaggiore, the most southern of the Cinque Terre. And yet I had never walked the Cinque Terre in the winter.

The weather was not promising, but the eternal optimist felt certain the winds would shift and the cold front due to blow in off the Atlantic would decide to dump rain somewhere else. Never mind that the forecast hadn’t changed for five days and this cold front seemed quite determined to reach the Ligurian coast more or less in tandem with me. 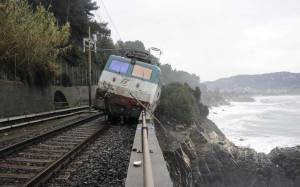 Train derailed in Liguria due to mudslide.

Never having been to Levanto, the town just north of Monterosso (the most northern of the five sisters), I chose it as my base for this mini-getaway. It turns out Levanto is itself a walkers’ paradise with trails running along the coast both south to the Cinque Terre and north to Bonassola.

So the thing is the Atlantic cold front arrived right on time and brought with it all the rain the forecasts had predicted, and then some. I did manage a little bit of walking in the Cinque Terre though most of the trails were closed due to mudslides earlier this winter. In Vernazza, perhaps the most beautiful of the Cinque Terre and the town overrun by water and mud in a massive flood in October 2011, I was greeted by a stage 2 alert telling tourists to leave and residents to get at least to the first floor of their buildings or evacuate. 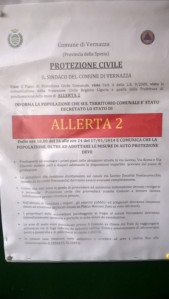 But it was beautiful. Insanely beautiful in its wondrous solitude free of all but a few intrepid tourists (I met an Australian family, with dad in a tee-shirt, and a young Japanese couple). 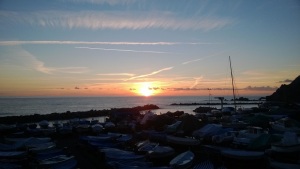 The calm before the storm.

In addition to a little bit of walking and discovering the charm of Levanto there was time for lots and lots of focaccia, the biggest draw for me to Liguria (just after the sea). I was right, Cinque Terre is indeed worth a visit any time of year, including on a cold and rainy January weekend. 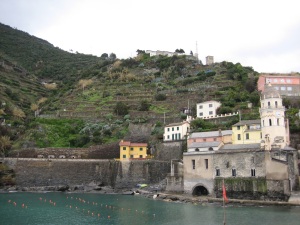 4 thoughts on “Cinque Terre in January – lots of rain, beautiful all the same”