Oh what Italy could be with a little yellow paint

Day 2, Sunday, 22 April 2007 – Tip for the day: everybody in Valle d’Aosta seems to barbecue on Sunday and nobody offers you some of their grilled meat and vegetables even if you stare longingly at the grill while asking for directions. 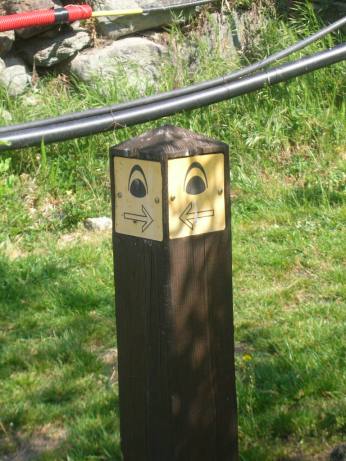 Tip for the day II: if you are walking in Valle d’Aosta on a Sunday make sure you have a hearty breakfast and you bring plenty of good stuff for lunch because the smell of the BBQ travels far.

Tip for the day III: what ever you do don’t do like your correspondent…skip breakfast and bring only nuts and dried fruit for lunch.

I’d been introduced in Aosta to a very kind man named Enea Fiorentini who is something of an expert on the Via Francigena, above all on the part of the route in Valle d’Aosta.

Enea inundated me with maps and preceded to explain to me how to arrive all the way to Ivrea, three days away, avoiding the busy Statale (state road) 26. He also told me that a mystery group has been painting yellow arrows and the letter “F” along the route to help pilgrims until the government gets it together to do something about marking the trail.

Leaving Aosta I quickly found the yellow arrows and was feeling quite content with myself until they disappeared and I found myself scrambling about looking for a trail, an arrow, anything. Enea’s map didn’t cover the spt where I lost the arrows. I ended up on the SS 26 breathing fumes, dodging vehicles and wondering why Italy can’t hire some of its army of unemployed and under-employed youth to mark these trails. Give them a bucket of yellow paint and a paint brush and send them on their way.

Several attempts to leave the SS 26 proved fruitless and by the arrival in Saint Vincent I was discouraged and wondering how I would ever make it to Rome if I have to spend half my time and three-quarters of my energy looking for trails that may or may not exist.

If somebody from the secret yellow paint group is reading this, a few thoughts: first off, thanks for the efforts, the idea is stellar. Second off, don’t be so parsimonious with the paint. Slop it on there, all future pilgrims will thank you. Third off, speak to the local government, could they really be against what you’re doing and couldn’t they give you some funds to help the project?

I walked for 500 meters with Nico (aged 85?) in Nus, but other than that it was a solitary affair. He wouldn’t let me take his picture and responded to my query with: “Nus is full of pretty women, take their picture.”

Exhausted and exasperated I plopped down at the hotel Leon d’Oro feeling very much like an isolated pilgrim on my own and cut off from the world. The hotel thing is certainly more luxurious than the shared quarters typical of the Camino de Santiago (and something has to be said about not being in 30-person rooms with 18 snorers), but it’s just not the same when you don’t have fellow pilgrims to swap stories with and compare injuries.

A pizza with vegetables and a few glasses of local red wine raised my spirits a tad before bed time.

Just for the record, I looked hard in Nus, no pretty women to be seen.

State of the route: potentially good in that the trails exist, but finding them is sort of like shooting pool in the dark, the exasperated pilgrim is likely to settle for the horrible S26. Water fountains in almost every village.

Weather report: sunny in the morning though a bit hazy, clouds by mid-afternoon and two drops of rain (literally) in late afternoon. 17 degrees C on departure and 22 on arrival.

Medical report: worrying. The three blisters became five after a few hours and they all hurt. Some cramping in both calves.